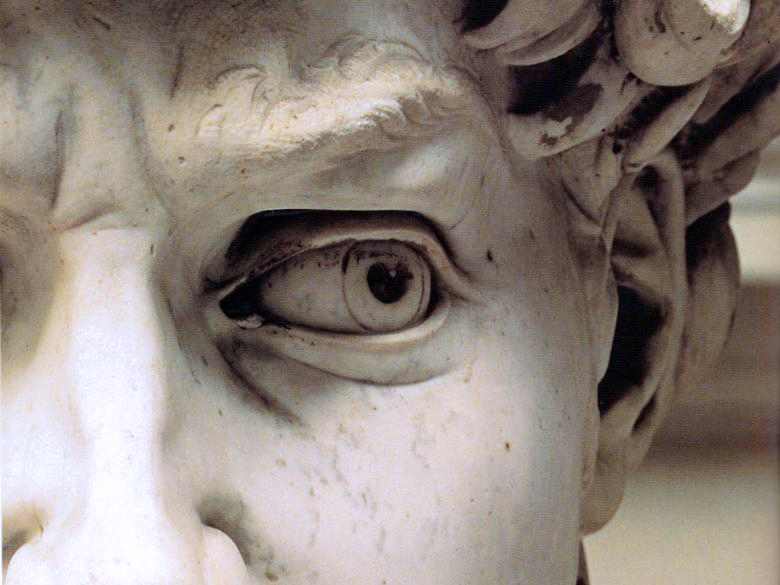 The detail of the David’s eyes. The penetrating glare was originally fixed in the direction of Rome.

The David – Bringing Marble to Life

It was exactly 516 years ago that Michelangelo completed the David. This masterpiece of the Renaissance was created in marble and is the most recognizable sculpture in the world. Beginning in 1501, Michelangelo worked on the masterwork until mid-February 1504. The white marble statue stands seventeen feet tall and represents the Biblical hero David, a favored subject in the art of Florence at that time.

David was originally commissioned as one of a series of statues of Biblical and allegorical figures to be positioned along the roofline of the east end of the Duomo in Florence. Because of the nature of the hero it represented, where a strong idyllic young man beats a larger, fearsome opponent, the statue soon came to symbolize the defense of civil liberties embodied in the Republic of Florence. As originally positioned, the eyes of David and their warning glare, were fixed in the direction of Rome.

The history of the statue began decades before Michelangelo’s work on it began. The Overseers of the Office of Works of the Florence Cathedral (the Operai), had plans to commission a series of twelve large sculptures for the buttresses of the Duomo. In 1410, Donatello made the first of the statues, a figure of Joshua in terracotta. A figure of Hercules, also in terracotta and likely under Donatello’s direction, was commissioned from the Florentine sculptor Agostino di Duccio in 1463. Eager to continue the project, in 1464, the Operai contracted Agostino to create a sculpture of David.

The block of marble was provided from a quarry in Carrara, in northern Tuscany. Agostino only got as far as beginning to shape the legs, feet and the torso, roughing out some drapery and gouging a hole between the legs. Agostino felt that the marble had too many imperfections and would not be stable if completed as a standing statue. His association with the project ended with the death of Donatello in 1466.

It was not until ten years later that master sculptor Antonio Rossellino was commissioned to take up where Agostino had left off. He examined the block of marble in minute detail and even performed experiments with small pieces of Carrera marble to determine how the veining would affect the stone’s strength. In the end, Rossellino also felt sure that the white marble could not stand the stresses. He terminated the contract soon thereafter. The block of marble remained neglected and unattended for 26 years in the yard of the Cathedral’s workshop.

By 1501, the Operai were determined to find an artist who could take the large piece of marble and turn it into a finished work of art. They ordered the block of stone, which they called ‘the Giant,’ to be raised on its feet so that a master experienced in this kind of work might examine it and express an opinion. Though Leonardo da Vinci and others were consulted, it was Michelangelo, at 26 years of age, who convinced the Operai that he deserved the commission. On August 16, 1501, Michelangelo was given the official contract to undertake this challenging new task. He began carving the statue early in the morning on September 13, a month after he was awarded the contract. He would work on the massive statue for more than two years.

Michelangelo worked on the David in utmost secrecy, hiding his masterpiece until January 1504. Since he worked in the open courtyard, Michelangelo was completely exposed to the elements. When it rained, he worked soaked to the skin. As unpleasant as that must have been, it provided a number of benefits. The rain made wet sanding of the marble’s detail easier, but it may have also given Michelangelo an altogether different type of inspiration. In the month preceding his initial sculpting, he made a wax model of his design. Later he an idea come to him. He submerged the model in water. As he worked, he would let the level of the water drop and using his different sizes and shapes of chisels, he sculpted what he saw emerging. For the entire period, he was a man consumed. He slept sporadically and did so in his clothes and boots. He rarely ate. The work that resulted has been described as ‘touched by the divine.’

The pose of Michelangelo’s David is unlike that of any earlier Renaissance depictions of the Old Testament heroic figure and no earlier Florentine artist had omitted the giant altogether. The bronze statues by Donatello and Verrocchio had the hero standing victorious over the head of Goliath, while in the painting by Andrea del Castagno, David is shown in mid-swing as Goliath’s head rests between his feet. Michelangelo depicts David before his battle with Goliath. Instead of being shown victorious over a much larger foe, David looks tense and ready for combat. David’s victory was one of cleverness, not of sheer force. He transmits exceptional self-confidence and concentration, both values of the thinking man, considered perfection during the Renaissance.

The statue may be static, but it conveys undeniable action and motion. His brow is drawn, his neck tense and the veins bulge out of his lowered right hand. His left hand holds a sling that is draped over his shoulder and down to his right hand, which holds a rock. The twist of his body effectively conveys to the viewer the feeling that he is in motion, an impression heightened with contrapposto. David stands with one leg holding its full weight and the other leg forward, the thigh muscles flexing in the right leg. This classic pose causes the figure’s hips and shoulders to rest at opposing angles, giving a slight S-curve to the entire torso. The contrapposto is emphasized by the turn of the head to the left and by the contrasting positions of the arms.

The detail that Michelangelo imbued in the statue is breathtaking. At first glance, the statue looks so real, so massive and so perfect. Michelangelo even preceded medical science of the day with his knowledge of blood circulation. Over 100 years before science described the mechanics of the circulatory system, Michelangelo sculpted it perfectly in his masterpiece. This is particularly true with the protruding jugular vein, which is not normally visible, but in the David, the vein is clearly visible above the collarbone. David, young and in excellent physical condition, is so tensed and ready for battle that his blood pressure has caused the vein to raise around the skin of his neck.

The proportions of the David are atypical of Michelangelo’s work; the figure has an unusually large head and hands. These enlargements may be due to the statue’s original intended position on the Duomo’s roofline where the important parts of the sculpture may have been accentuated in order to be visible from below. When viewed from front to back, the statue is unusually slender in comparison to its height. This is believed to be a result of the work done on the block before Michelangelo began carving it.

In January 1504, as the sculpture was nearing completion, Florentine authorities had to acknowledge there would be little possibility of raising the 12,478 pound statue to the roof of the Cathedral, a height of 262 feet. Additionally, the detail of the statue was too remarkable to place at such a distance from the ground level. A committee of 30 Florentine citizens was convened. The group comprised many artists, including Leonardo da Vinci and Sandro Botticelli. It was tasked to decide on an appropriate site for the David. While nine different locations for the statue were discussed, the majority of members were closely split between two sites.

Reaching for the Stars – The Liberty Science Center Planetarium

One group, led by Giuliano da Sangallo and supported by Leonardo and Piero di Cosimo, believed that due to the imperfections in the marble, the sculpture should be placed under the roof of the Loggia dei Lanzi on Piazza della Signoria. The other group thought it should stand at the entrance to the Palazzo della Signoria, the city’s town hall (now known as Palazzo Vecchio). Botticelli still felt that the sculpture should be situated on or near the Duomo.

In June 1504, David was installed next to the entrance to the Palazzo Vecchio, replacing Donatello’s bronze sculpture of Judith and Holofernes (which also embodied a comparable theme of heroic resistance). It took four days and 40 men to move the statue the half mile to the Piazza della Signoria. Later that summer the sling and tree-stump support were gilded and the figure was given a loin-garland.

By placing Michelangelo’s statue in at the Palazzo Vecchio, the Florentine authorities ensured that David would be seen as a political, as well as artistic statement. Many do not realize that these political overtones led to the statue being attacked twice in the 16th century. Protesters pelted it with stones the year it debuted and in 1527, an anti-Medici riot resulted in its left arm being broken into three pieces!

In the mid-19th century, small cracks were noticed on the left leg of David, the same area that had caused Antonio Rossellino to give up the commission on the statue four centuries earlier. The cracking was likely attributable to uneven sinking of the ground beneath the massive statue. In 1873, the nearly four century-old masterpiece was moved indoors to be displayed in the Accademia Gallery, where it has since attracted countless visitors. A replica of the David was placed in the Piazza della Signoria in 1910, which has confused a remarkable number of visitors for over a century. The replica can be viewed for free; one must buy a ticket to see the David.

The David escaped World War II undamaged despite Hitler’s desire to add it to his art collection. Fortunately, although a hammer-wielding vandal broke a toe off the David in 1991, the statue of Michelangelo’s masterpiece remains closely protected in his Accademia Gallery home, where all can enjoy his glory and hopefully will continue to do so for many centuries to come.

7 Reasons to Visit Italy This Winter

How to Organize the Perfect Italian Dinner Party in New Jersey