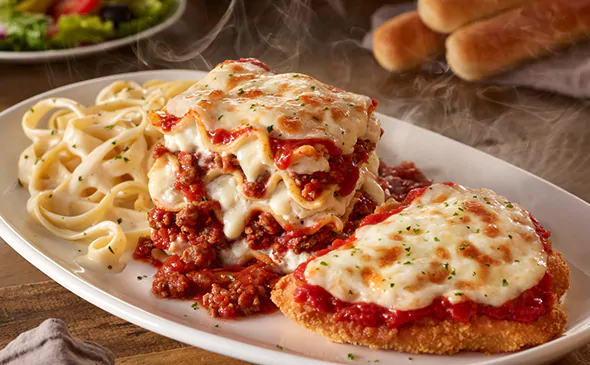 Fettucine Alfredo, Lasagna Bolognese and Chicken Parmigiano all on one plate. Rumor has it that it is served at the Olive Garden, but we wouldn’t know for sure. We do know that it does not exist in Italy.

Myths of Some Italian Food in Italy

Italian food is loved all over the world for very obvious reasons, but there are some misconceptions about this much-loved cuisine and readers of the Italian Tribune may already know some of them. Visitors to Italy certainly can recount first-hand stories of their experiences, but for the uninitiated, there a few myths that need to be shattered.

Myth Number 1 – An Italian name does not mean it is Italian. Spaghetti Bolognese, Fettuccine Alfredo and Marinara sauce are classic examples of foods that are associated with Italy, but are not served at all in the country, except perhaps at touristy establishments. You will find a phenomenal Bolognese sauce served over pappardelle in Bologna, it is light with only bits of veal or beef. It is nothing like the pedestrian pasta peddled in the United States and named for Bologna. And, do not count on enjoying the pasta served with garlic bread, either. Just as the cuisine changed in the 1900s for immigrants in America, based upon what was available and could be afforded, so did their eating habits. In Italy, pasta is the Primo Piatta and meat or fish is the Secondo Piatta. To have both on one plate is bewildering to Italians.

That is only one of many differences encountered by Americans who are visiting Italy for the first time. They immediately notice that portions are smaller, dishes are simpler and lighter. The high-quality ingredients speak for themselves and pizza is a revelation and is not piled high with cheese and sausage or pepperoni, vegetables and absolutely no pineapple!

This brings us to a second myth. Everywhere in Italy, restaurant menus often dazzle guests with the many courses that are available: antipasto, primo, secondo, contorni and dolce, but the fact is, Italians do not eat enormous multi-course meals, with the exception of Sundays and special occasions. Since ‘doggie bags’ are not a common feature in Italy, if you fall into a food coma before the main course arrives, the food just tends to be wasted.

Most people who go out to eat stick to two courses, usually some antipasti and a small dish of pasta or an entree. Additionally, a lot of the food consumed in Italy is naturally very healthy. While one often thinks of the extraordinary desserts that Sicily is famous for, other than holidays, most desserts would consists of fruit. As a group, Italians eat a lot of soups and salads with lentils and chickpeas.

Another area that some travelers are concerned about is committing some food-related mistake in Italy. That is yet another myth. Italy is not France and although Italians are rather particular about food, that is really in terms of how it is prepared. As far as which fork to use is not something to be concerned about. If you want to remember one cardinal rule, it is that Parmigiano cheese does not belong on fish or pasta served with fish.

Italians know quality and when it comes to food, if it is not prepared well, whether it is Chinese, French, Thai or Indian, the restaurant will be out of business soon. Rest assured, if one local has a bad meal at a restaurant there will be 100 signs of the cross made on the establishment before the week has ended.

If you order Pasta Carnonara (originated in Rome), do not expect it to be made with cream like in America. Pasta Carbonara is simply eggs, pancetta, lots of Parmigiano and black pepper. Why the U.S. adds cream I do not know.

Finally, many people imagine Italy as a wine-drenched paradise and to be truthful, if you are on vacation – it is! Italians as a rule drink far less wine than you might otherwise expect. One glass of red wine with dinner in commonplace, but two glasses or more is typically not the case. You do not see Italians become inebriated, as seems to be customary in America. After all, that is hardly good for la bella figura! So as the expression goes when in Rome…