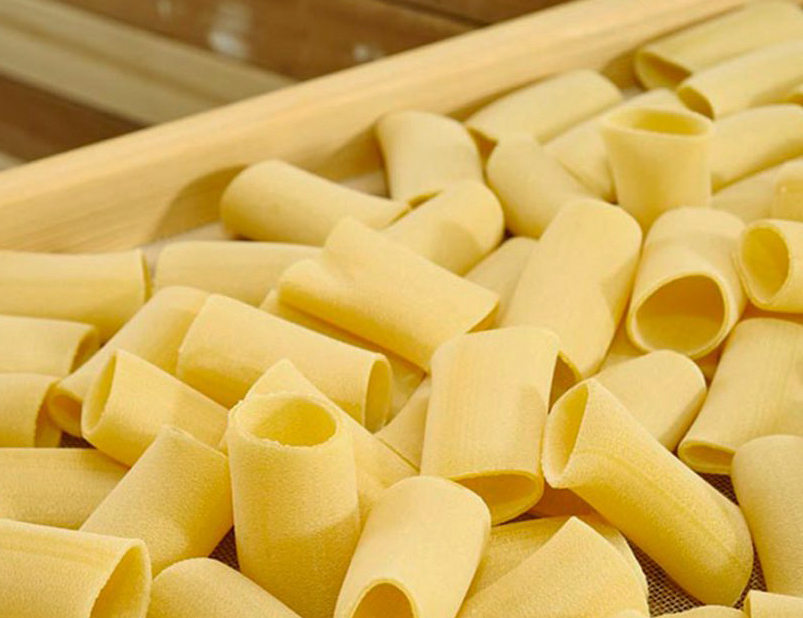 During the late 18th century, a sleepy coastal town in the Campania region known as Gragnano transformed itself from a silk maker, to a gold mine. The gold was not the precious metal used in jewelry, it became famous for its ‘white gold,’ also known as macaroni.

In Gragnano, a town of 29,000 inhabitants located 18 miles southeast of Naples, the wind blows rhythmically throughout the day; residents call it Marino and it brings with it humidity and minerals from the sea into the streets of Gragnano.

According to third-generation pastaio (pasta maker), Giuseppe Di Martino, CEO of Pastificio Di Martino “You could produce and dry pasta every day because of the predictability of this wind blowing inside the village into the valley.” He is the head of one of major pasta factories in town.

Known as the Città della Pasta (City of Pasta), Gragnano became famous for its macaroni in the late 1700s. It began making pasta was out of necessity. For generations the town engaged in silk production, but when the silkworms suddenly started dying, due to a disease, another industry was needed.

Although it was not the major industry in the town, its history and tradition of making dried pasta dates back much further, to the 12th century. At about the same time, the personal doctor of King William II of Sicily (1153 – 1189), Giovanni Ferrario, a professor at a medical school in Salerno, Italy, proclaimed the benefits of Gragnano’s dry pasta, advising patients with typhoid fever to eat al dente vermiculos, the predecessor to vermicelli. As an ironic fact, given the town’s later reliance on silk worms – vermicelli means little worms.

The pastas of Italy were, and to this day, are quite different in the south versus the north. In the regions of the Piedmont, Lombardy, Emilia Romagna and the Veneto, fresh pasta is a blend of wheat flour and water that is bound together by eggs. The dough is then pressed through rollers to form everything from tagliatelle to lasagna to tortellini to – well, you get the picture. Dry pasta on the other hand requires just two ingredients – water and durum wheat semolina, which is traditionally extruded through bronze dies that provide a coarse texture to the final product, giving the pasta the ability to soak up more sauce.

In hindsight, it easy to see how Gragnano is in an ideal position for pasta-making factories. The city is encased by mountains on three sides and the sea on the other, creating a rain shadow effect ideal for drying pasta slowly in the street over days, as marine breezes blow in from the coast. The buildings are staggered in such a way that the moist wind provides natural ventilation by forming a tunnel along the town’s ancient main thoroughfare, Via Roma, where the majority of factories were built. If it were not for the faint semolina powder rising into the air, you would never guess that this sleepy coastal town was once one of the richest in the region in terms of pasta production.

In the 19th century, Gragnano was one of the famous stopovers on the Grand Tour and the reason was its pasta. The picturesque town is often portrayed in paintings from the period, a time when artists would set up their easels in the Valle dei Mulini (Valley of the Mills) and create depictions of life in Gragnano. No less than six such paintings hang in the Louvre. At that time, 40 watermills ground fresh wheat from nearby Puglia with spring water streaming in from the Monti Lattari. Nearly 70% of Gragnano’s population was involved in the pasta industry and a staggering 200,000 pounds of pasta were produced in the town each day. When King Ferdinand II of Naples visited the city in the mid-1800s, he was so impressed by the pasta-making ballet that he selected the the town as the official suppliers for the summer court at Quisisana, outside Castellammare di Stabia.

By the mid-19th century, the city’s dry pasta was so popular that the town began a massive renovation, tearing down old buildings to make way for dozens of family-run factories. Buildings were positioned so they did not cast a shadow on their neighbors and Via Roma was widened to make it easier for pasta makers to receive raw materials from the Valle dei Mulini. Long strands of pasta were dried on river reeds and dangled like weeping willow branches outside the front door of the factories. Without preservatives, the pasta depended upon a slow drying process and open air drying was a true art, improved over the centuries and passed down as a family secret from generation to generation. Each family seemed in competition with the others to maintain the most dust-free outdoor environment. This resulted in the cleanest streets in all of Europe.

During the late 19th century and early 20th century, Gragnano was exporting an enormous amount of pasta for Italians who immigrated to the United States. It reached a point where Gragnano’s pasta in the U.S. even surpassed its enormous popularity in Italy! By the turn of the 20th century, consolidation among some of the family businesses brought the number of factories down to 120, but within a decade, industrialization brought mechanized, ventilated rooms, replacing the traditional method of al-fresco drying. Factories grew in size and further consolidation brought the number of facilities to 42. Even as the exports of pasta increased and new markets emerged, mechanical tools replaced people, driving up unemployment. This was the catalyst that led many laborers to migrate to the U.S. in search of work.

Mascheras Come Out to Craft the Beautiful Masks of Venice

With the industrial age in full swing, Gragnano found that it could not compete with the huge companies in the north. It did not have the resources or capital to fight it out with the pasta giants in terms of price, or production, so what it focused on instead was quality.

When exportation to the U.S. was banned during World War One as part of the government’s plan for economic defense, the Italians in the U.S. who had once imported the white gold of Gragnano recreated the slow drying process with the help of machines to produce Italian-style pasta for the American market. One thing they could not replicate; however, was the taste. The simple ingredients of the pasta – water and durum wheat, each had particular qualities that were absent in the U.S. production. First, in the case of the water, it was very low in mineral content and did not change the taste of the pasta. Second, the Italian durum wheat was extremely fresh, only three hours of travel time from Puglia. These factors are still the reasons behind the quality of Gragnano’s successful pasta production.

Today there are 14 pasta factories in the town and they account for 14% of the dry pasta exported from Italy. The town’s Consorzio Gragnano Città della Pasta ensures that the white gold is produced to strict regulations and in 2013 the town was granted a Protected Geographical Indication by the European Union.

As a way to pay homage to the city’s pasta heritage, Gragnano’s pasta makers still set up stands and cook in the street each September during the Festa della Pasta di Gragnano, a festival that first kicked off after WWII as a way to revive the town’s traditional pasta production. The city swells to five times its size, as 100,000 people stream into town for the two-day event. Gragnano’s pasta may now be dried in sealed production lines, but it still uses the same moist and humid air from the sea that once dried the strands dangling along the town’s streets. Preserving tradition by preserving the unduplicated flavor, Gragnano is truly Città della Pasta.