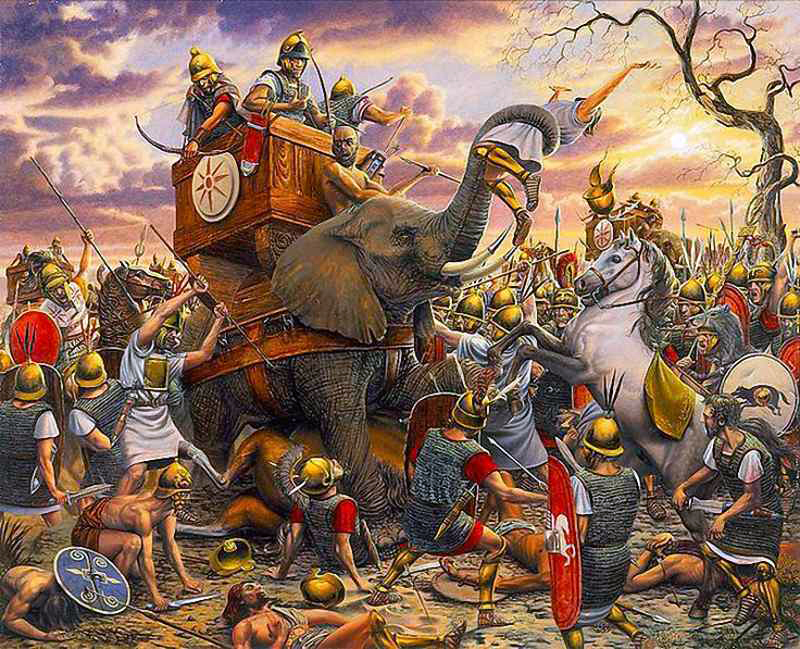 In the Punic Wars of the third and second centuries BC, the score was Rome - 3, Carthage - 0.

A Brief History of the Roman Empire

The story must really begin with the Etruscan civilization, which reached the height of its powers between the 7th and 6th centuries BC. They represented a loose union of city states spreading out from the center of Italy, in the area corresponding roughly to Tuscany, western Umbria and northern Lazio. It gained wealth through trading, primarily copper and iron and its culture was influenced by its trading partners in the Near East and its trading opponents in Greece. The Etruscans formed a confederation of about 30 villages and tribes for mutual defense against invaders and marauders near the ancient city of Rome which was intended for mutual defense. Modern historians refer to it as the Latin League. The decline of the Etruscans was gradual, but by 500 BC, the political destiny of Italy had passed out of Etruscan hands.

In 509 BC, the city of Rome expelled the last of a line of Etruscan Kings – Tarquinius Superbus. He was replaced with a Republic governed by two elected consuls. Rome formed an alliance with the Latin League in 493 BC and became the dominant member. Throughout this period, Rome refined its military organization and effectively subdued through war or the threat of war, any of the remaining tribes and states within Italy. Rome converted its former adversaries into “subordinate allies,” which owed troops and support to Rome, but maintained a degree of autonomy and were not required to pay financial tribute.

Between 264 BC and 146 BC, Rome fought three Punic Wars against Carthage, during which Hannibal’s troops occupied Italy. He was ultimately forced back to Africa where he was defeated and at the conclusion of the third war, Rome destroyed Carthage and gained the foe’s trading empire. During this era, Rome battled against other powers, subduing the entire eastern area south of the Alps to Spain, as well as Macedonia, the Greek states and the Seleucid Empire, which extended into Persia. To the north, Rome’s greatest opponents were the Celts, who they finally ousted from the Po Valley in 190 BC. Rome thus became the dominant power in the Mediterranean, with Italy at its core. The Empire would continue to grow into the second century AD.

Between 91 BC and 88 BC, Rome expanded its definition of citizenship to include all of Italy south of the Po, speeding up a process of “Romanization.” Historians point to this period where all of Italy came to adopt Roman culture. Forty years later, a trio of politically and militarily powerful men allied to support one another and rule Rome. The ambitions of the men did not permit the triumvirate to last for long and the ambitions of two of them, Pompey and Julius Caesar, led to a civil war. Caesar won and was declared dictator for life – not Emperor. He was assassinated in 44 BC by senators who feared a monarchy in Rome.

Power struggles continued in the aftermath of Caesar’s death. The names of the protagonists are well-known to most. They included Caesar’s adopted son Octavian, as well as the assassins who killed him – Brutus and Cassius. The surviving sons of Pompey played a part, but most famous was the former ally of Caesar, Mark Antony. He was defeated by Octavian’s close friend Agrippa in 30 BC and committed suicide along with his lover and Egyptian leader Cleopatra. The sole survivor of the civil wars, Octavian, was able to accrue great power and have himself declared “Augustus.” He ruled as the first Emperor of Rome.

The Empire Reaches its Zenith

After a period of conquest, Rome was rarely threatened at more than one border at any given time, allowing expansion of its trade routes and influence. The Roman Empire reached its greatest territorial extent around the year 200 AD. It was one of the largest empires in history, controlling most of Europe, North Africa and the Middle East. This represented control of over three million square miles and a population of almost 60 million, or about one-fifth of the entire world’s population. Such was the growth of the Empire that each of its three largest cities – Rome, Alexandria and Antioch – were almost twice the size of any 17th century European city.

The Western Roman Empire began to disintegrate in the early 5th century as Germanic migrations and invasions chipped away at its northern borders. Romans were successful in fighting off all invaders, most famously Attila the Hun, but the Empire had assimilated so many people of dubious loyalty to Rome, that it started to crumble from within.

Appreciating the Famous 250 GT Pinin Farina Coupés in the 1950s

In 410, the Goths, under the leadership of Alaric, invaded Italy from the north and camped outside Rome. While in the midst of negotiating terms for a settlement, they suddenly sacked the city. This was the first time in over eight centuries that foreign invaders had looted the Eternal City. Rome limped on, but it was a shadow of its former self. It was sacked again in 455 by the Vandals and the end of the Western Roman Empire was near. The deposition of Emperor Romulus Augustulus in 476 AD is generally accepted as the end of the empire in the west.

When one examines the social, political, business and cultural features of the Roman Empire, for centuries it was a remarkably multicultural society. It created a shared identity within its diverse population and managed to effectively sustain its political system, culture and society for hundreds of years. It is only when measured in modern terms that the full impact of what was achieved by the Roman Empire can genuinely be assessed. If one were to compare Rome to the United States, then Rome’s ascension of influence in 509 BC would correspond to the signing of our Declaration of Independence, 242 years ago. Most historians state that the peak of the Roman Empire occurred during the reign of Trajan (98–117 AD). In relative terms, that would mean that it would be almost four hundred years before the U.S. would reach its peak. The Roman Empire would split into the Western and Eastern Empires during the fourth century AD. While the Western Empire would fall during the fifth century, the Eastern Roman Empire would endure until 1453, spanning an astounding 1962 years. That would mean an expectation of another 1,720 years of democratic government for the U.S. to equal Rome, an almost incomprehensible amount of time. Perhaps it is best said that the only thing brief about Rome’s history has been this feature!