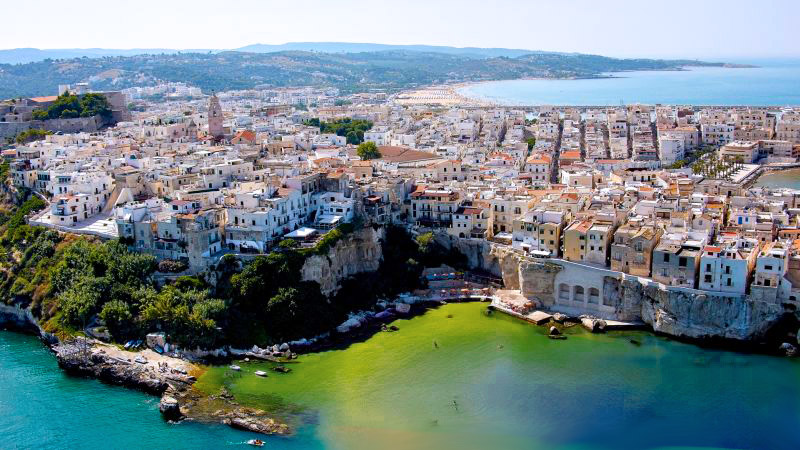 On the coast of Puglia sits the beautiful town of Foggia.

In the southern region of Apulia, Italy, is the city of Foggia. This historic area has been continuously inhabited since prehistoric days and was one and the early agricultural colonies in the Italian peninsula. The marshland was drained to create fertile land that was ideal for farming.

During the Middle Ages, Foggia became part of the Roman Empire. Frederick II (December 26, 1194 – December 13, 1250) as Emperor and King of Sicily, invested in the city by building various palaces and churches. Throughout this period, the economy of Foggia rose and fell as different rulers changed taxes and laws, but throughout it all, it was the center of grain storage in southern Italy and an important link between the country’s southern and northern regions. Severely damaged by Allied bombing during World War II, like a phoenix, Foggia has risen from the ashes.

Unbelievably, Foggia is not a typical destination for travelers, yet is contains a stunning amount of sites and some truly beautiful architecture, such as the Duomo and the Chiesa delle Croci. Furthermore, its proximity to the eastern coast of Italy means that from here you can explore parks such as Gargano and the gorgeous Tremiti Islands.

Located in the Piazza Francesco de Sanctis, the Cathedral of Foggia was originally built in the Romanesque style in the 1170s. Damaged in the earthquake of 1731, it was gloriously restored in a Baroque style. Take note of the cathedral’s façade which has ornate decorations and intricate stone work. The richly decorated interior has large windows that allow the light to cascade over the paintings and woodwork.

Chiesa delle Croci is one of the most unique churches in Italy. You will find it in the northern part of the historic city-center of Foggia, approximately a 15 minute walk from the cathedral. At the front of this church is a series of five ornate exterior chapels that you can walk through to get to the main building. Created in 1693, the complex has a Baroque design and is the only listed national monument in Foggia. Inside the church there are many paintings, but the grounds and the arches are the main attraction of this interesting place of worship.

One of the main squares in Foggia is the Piazza Umberto Giordano. It is a great place to relax and enjoy the fine Apulian weather. This square is surrounded by many shops with plenty of opportunities for great values in boutiques. It is also a fine place to sit and ‘people watch’ from one of the numerous cafes.

Located in the heart of the city-center, the Dogana Palace stands as one of Foggia’s landmarks and has been an important structure in the city’s history for hundreds of years. This fine building dates back to the 15th century and is one of the oldest standing structures in Foggia. It originally served as a customs center until it was converted into the palatial seat of the Province of Foggia. The palace also hosts a museum containing a brilliant collection of contemporary and modern art. But if you want to learn about the history of this charming region of Italy, the Museum of the Territory is the perfect place to visit. Located on the Via Pasquale Fuiani, it is close to the cathedral. Items on display include coins, burial remains, pottery, ceramics and clothing.

The area surrounding Palazzo Dogana is a beautiful place to explore. Visitors will be surrounded by and immersed in history. Starting at the palace, you can head into the Quartieri Settecenteschi for a true slice of local life. Here you will find a series of tightly packed streets lined with colorful houses and buzzing with local activity. Alternatively you can head onto the Corso Giuseppe Garibaldi and see some of the main architectural sites including the Comune Di Foggia and the Piazza Internati in Germania.

The Foggia Civic Museum serves as a fantastic addition to the Museo del Territorio and offers an interesting look at the history of the region, dating as far back as the Neolithic Age. Located in the Piazza Nigri in the northern section of the old town center, the museum is easily accessible on foot. Here will find great displays of artifacts and relics from various periods of history, including archaeological finds from the nearby site of Arpi. There are reconstructions of traditional terrace houses, collections of jewels, ornaments, statues and a series of paintings from notable artists of the region.

The public gardens of the city, the Villa Comunale, Parco Karol Wojtyla, is an immense stretch of parkland in the eastern part of the town. Starting at the Piazza Camilo Benso Conte, the front of the garden is lined with a beautiful white stone-columned walkway and leads into a landscaped square with a series of flower displays. There are footpaths leading off into numerous directions with fountains, statues and sculptures, plus a wonderful shaded area at the back of the park that is covered with trees. It is a perfect place to stop and sit while enjoying a sunny afternoon, taking in this treasure of Puglia.

While in the area, it is well worth while to visit the Parco Nazionale del Gargano. One of Italy’s largest national parks, it takes its name from the monumental Mount Gargano and is approximately a 40 minute drive to the north of Foggia. The park is renowned for its beautiful landscapes and sweeping stretches of rocky coastline. This park presents numerous opportunities including hiking through the woodlands and mountains or visiting the small coastal town of Vieste. Additionally, you can explore the coastline and find a secluded hidden beach like Cala di Porto Greco, near the Portogreco tower.

Located off the north coast of the park is a small archipelago called the Tremiti Islands. You can reach them via a ferry from Termoli or Rodi, which are both coastal towns approximately 30 minutes from Foggia. San Domino and San Nicola are the main inhabited islands and provide most of the facilities for tourists. Diving is a popular pastime here due to the beautifully clear waters and abundance of aquatic life that surrounds Tremiti. Alternatively, you can explore the islands on foot, admire the rugged landscapes or explore the coastal caves of these beautiful Islands.

7 Reasons to Visit Italy This Winter

How to Organize the Perfect Italian Dinner Party in New Jersey