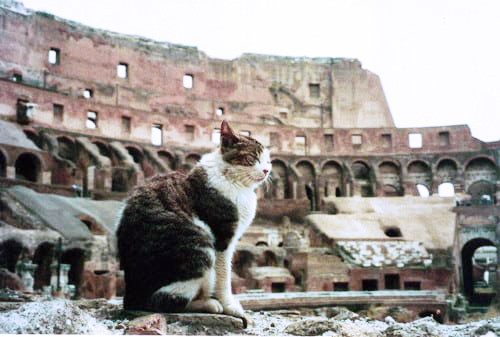 One of the many feline residents of the Flavian Amphitheatre, more commonly known as the Colosseum.

All Roads Facts Lead to Rome

Rome – the Eternal City, is brimming with history, whether from the age of the ancient Roman Republic, Roman Empire, Middle Ages, Renaissance or more modern eras. In addition, its art, architecture, culture and beauty make it one of the most popular destinations in the world. Everyone can identify the Colosseum and St. Peter’s Basilica by sight and most know that Rome is the capital of Italy. Fewer people know that the actual name of the Colosseum is the Flavian Amphitheatre or that the present St. Peter’s is the second one at that location. By the way, Rome was not the first capital of the unified country – the Kingdom of Italy. It wasn’t the second either – those honors go to Turin and Florence. In view of the long and glorious history of Rome, we have assembled a few lesser known facts about our favorite city.

Rome is well-known for its beautiful and historic churches and basilicas. It has over 900 churches and if one asks how many major basilicas lie within Rome, versus how many major basilicas are in the city of Rome, there are actually two answers. Four major basilicas lie within Rome – the Archbasilica of St. John Lateran, the Basilica of Saint Paul Outside the Walls, the Basilica di Santa Maria Maggiore and St. Peter’s Basilica, which is technically located in Vatican City, so the answer to the second question is three. By the way, St. Peter’s is the largest church ever constructed.

Another trivia question, but one where you have a better probability of guessing the answer is whether Rome has more churches or fountains? There are many beautiful fountains in Rome. The Trevi Fountain, Bernini’s Fontana dei Quattro Fiumi (one of three fountains in Piazza Navona) and Fontana della Barcaccia in Piazza di Spagna are among the most famous, but churches outnumber fountains by more than a three to one margin.

As a follow up question, into which fountain are the most coins thrown? That should not be a difficult one at all, especially to anyone who has seen “Three Coins in a Fountain.” It is the Trevi Fountain. One could earn a very sizable income from the annual amount deposited in the fountain (as much as three quarters of a million dollars per year), but all of the money goes to charity.

The Roman mile is somewhat shorter than our measurement of a mile (about 4,800 feet versus ours at 5,280 feet), but each length was marked by a milestone, giving birth to the saying “All roads lead to Rome.” By the end of the Roman Empire, how many mile marker were installed” More than 5,000? More than 10,000? More than 20,000? Not even close – by the beginning of the fourth century, the Romans had laid down a road network of 53,000 miles throughout the Empire!

Another common misconception is that everyone in Rome wore togas. Actually, only free-born men were allowed to wear togas, a sign of Roman citizenship. Togas were spun from white wool. Women wore stolas and although stylistically one might describe it as nothing more than a female version of a togas, stolas were made from linen. On a separate note, but nonetheless style-related, women in ancient Rome dyed their hair with goat fat and beech wood ashes. The most popular colors of the day were red and blond.

Cook These 4 Delicious Lenten Recipes from Enna to Share

The most fashionable shopping area in Rome is along Via Condotti, but how long ago was Rome’s first shopping mall constructed? Since a shopping mall is a covered marketplace, the first one goes back to the rein of the Emperor Trajan, constructed between 107 and 110 AD.

Another curious and unusual fact is associated with the many feral cats in the Eternal City. Cats are considered to be part of Rome’s ancient heritage and Roman law allows cats to live without disruption in the place where they are born. Visitors will see wild cats climbing the walls of the Colosseum and sleeping among the ruins of the Forum. It is estimated that the city has over 300,000 of them. With all of the protection provided to the felines, one must assume that they are the city’s mascot – sorry, that honor goes to the she-wolf that cared for brothers Romulus and Remus, the city’s founders. Whether mythology or fact, the symbol still endures to the day.