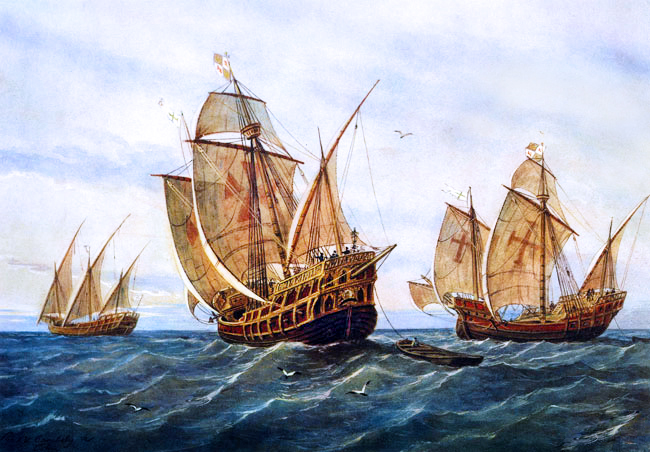 The three ships of the first voyage to the New World – the Niña, the Santa Maria and the Pinta.

Everyone knows the names of the three ships that sailed on Christopher Columbus’ maiden voyage to the New World – the Niña, Pinta and Santa Maria. Few realize that only the Santa Maria was the true name of the three ships. The Niña and Pinta were nicknames given to the vessels. The Santa Maria was the   largest of the ships and was a medium-sized carrack, with a deck roughly about 58 feet long. She had a single deck, three small masts and as a cargo ship weighed about 100 tons.

The other ships of the Columbus expedition were the smaller caravel-type ships. The Niña (the Girl) was actually christened the Santa Clara and sailed for at least 46 years. The actual name of the Pinta (the Painted One) is unknown. The exact measurements of length and width of the three ships have not survived, but good estimates of their capacity can be judged from notes written by their crew members. The Niña and Pinta were smaller than the Santa Maria, weighing between 50 and 75 tons, with a deck length of 50 to 60 feet.

On its first voyage across the Atlantic, the Pinta was captained by Martín Alonso Pinzón. It was a lighter and faster ship than the much wider Santa Maria, but little is known about the Pinta. It is believed that she was built in 1441, making the ship over a half century old at the time of Columbus’ first voyage. Her fate following the second voyage to the New World is also not recorded.

Smallest of the fleet was the Niña, captained by Vicente Añes Pinzón, brother of Martín. The Niña was Columbus’ favorite and he bought a half share in the ship for his second voyage to the New World, where she served as his flagship. The Admiral sent her as an advance guard to the New World for his third voyage in 1498, but the last that is known of the ship was a record of her voyage to the Pearl Coast in 1501.

The Santa María was the slowest of Columbus’ vessels, but performed well in the Atlantic Ocean crossing. During the return trip, shortly before midnight on Christmas Eve in 1492, an unauthorized crewmate was manning the wheel and the currents carried the ship onto a sandbank, running her aground off Haiti. Realizing that the ship was beyond repair, Columbus ordered his men to strip the timbers from the ship which were then used to build a fort which Columbus called La Navidad (Christmas).

After the success of his first voyage, the Spanish Sovereigns spared no expense in fitting out Columbus’ second voyage with a total of seventeen ships for the colonization of Hispaniola. These ships included a new ship christened the Santa Maria, as well as the Niña and Pinta from the first voyage to the New World. In February 1494, twelve of the ships returned to Spain with Columbus sailing on the Niña.

The remains of the Niña, the Pinta and the Santa Maria have proved elusive despite decades of searching. In 2014, it was reported that the wreck of the Santa Maria had been located. But the ship that was found dated more than a century later than Columbus’ voyages. It was the only one of the three whose approximate location was known. The Niña and the Pinta continued in service following the voyages to the New World, but no record has been discovered that give clues as to their fates. The three ships of that first voyage are considered among the ‘Holy Grail’ of ship archaeology.